Finalist for the nonfiction award from the Mississippi Institute of Arts and Letters (MIAL) for 2011.

Chosen by Delta magazine as one of the top five reads of 2011. 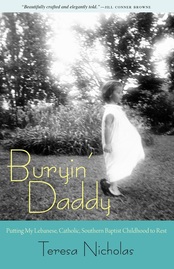 A descendant of Lebanese Catholic immigrants on her father’s side and of Baptist sharecroppers on her mother’s, Teresa Nicholas recounts a Southern upbringing with an unusual inflection. Beginning in the late 1950s, the memoir depicts her charmed early childhood, when she and her family live with her grandparents in a graceful old bungalow in Yazoo City, Mississippi. But when the author is five, her eccentric father, secretive, penurious, and hoarding, moves his growing family into a condemned duplex nearby. Separated from her beloved grandmother and chafing under her father’s erratic discipline, the girl longs to flee from the awful house. Later, when she’s a teenager, she and her father find themselves on conflicting sides of the civil rights movement, and their arguments grow more painful. She finally leaves Mississippi when a scholarship to Swarthmore College provides her escape.

Two decades later Nicholas has built a successful career in book publishing in New York. But when her father suddenly dies she returns for the funeral and spends a month in the hated duplex, ostensibly to help her mother adjust. As she learns more about her father, she comes to understand that he wasn’t just the angry man she thought she knew. And she also sees that her country-talking, stroke-affected mother is far from the naïve, helpless creature she recalled. Through a series of surprising, poignant, and humorous discoveries, the author and her mother uncover her father’s secrets, in all their complicated humanity. Her mother ultimately shows her how to forgive her father and come home again.

Graced with a palpable sense of time and place and peopled by memorable characters, this funny, moving memoir explores the intermingling of shame and love that may lie at the heart of family life.

“This is a magnificent book, beautifully crafted and elegantly told."
Jill Conner Browne, The Sweet Potato Queens' Book of Love

“Buryin' Daddy succeeds on so many levels I hardly know where to begin. . . her story is different from any I've ever read before, and I will long remember the people she's told me about in these pages."
Steve Yarbrough, Prisoners of War, The Realm of Last Chances

“This book has all the elements we hope for in a memoir: humor, pain, prose as fluid as poetry, wisdom, even redemption—and not just for the author.” Beverly Donofrio, Riding in Cars with Boys

“An astonishingly beautiful and potent memoir about a mother and daughter each coping in her own way with the oppressive and domineering patriarch of the family who remains unknowable until his death. Teresa Nicholas’s eloquent prose pulled me squarely into her living room."
Ann Fessler, The Girls Who Went Away

“Buryin' Daddy vibrates with honesty of feeling and thought, of eye and ear. An intimate story of simple moments and quiet truths, Buryin’ Daddy is always moving but never sentimental--heartbreaking at times but ultimately uplifting.” JoAnne Prichard Morris, Barefootin’: Life’s Lessons from the Road to Freedom

“In Buryin’ Daddy, Teresa Nicholas takes us on a mesmerizing journey into the conflicted heart of her family. The power of her story lies in Nicholas's crystalline prose and unflinching courage in telling the truth." Ruth Williams,Younger Than That Now

“Buryin' Daddy is a stunningly beautiful memoir written with exceptional grace and eloquence. The book is a classic portrait of how the American South both nurtures and haunts each generation.”
William R. Ferris, The Encyclopedia of Southern Culture, The Storied South: Voices of Writers and Artists

"Readers are in for a treat as Nicholas, together with her mother, peel back the deep layers to get at the truth behind family secrets. A surprisingly humorous and wonderfully detailed story, Buryin' Daddy is one readers won't quickly forget." Delta magazine

"This is a memoir that is difficult to put down." Jackson Free Press

"A book you want to share with others." Ralph Eubanks, Dir. of Publishing at the Library of Congress
​